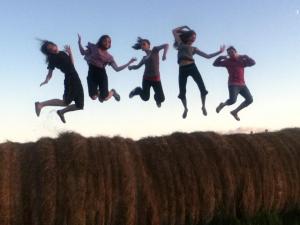 Mind Your P’s and Q’s

Having a family is wonderful, but it is also a frenzied life. When I used to tell people I had three children under five they would look faint and say, “I guess you’re going to be busy!”  Now that I have five children, most people can’t even articulate their thoughts. They simply stammer and take a step back in case it’s catching.

As a new mother, I had a plan. At three months, my son would excuse himself when he burped, even if I was patting his back at the time. At six months he would be potty trained and would discretely flaunt it at social gatherings. “Please wash behind my ears” and “Thank you for the strained liver” would be common phrases around our house. Algebra would be mastered at one and… Well, you get the picture.

When my husband and I had the third child, an amazing thing happened. They out-numbered us. They had a majority. They took over. My goals became much more realistic:

1. Make it through the day without popping a blood vessel in my forehead. (I sometimes had to send myself to my room to accomplish this one.)

2. If a child is running with a butcher knife, make sure the pointy end is down.

3. One plus one equals torture of the third, so if children gather in the basement, close the door and turn up the T.V.

I still insisted on basic politeness and correct grammar, however. Then one day I heard my eldest son say to the younger, “Your Ninja Turtle guys is choking on their own blood.” I quickly corrected him, “That’s ‘your Ninja Turtle guys are choking on their own blood,’ Honey.” I then had a mental flash twenty years into the future of a very polite axe murderer correcting the judge, “Five bodies are in the sewer.”

I knew I’d have to expand my goals. It was time for minding not just the P’s and the Q’s but the whole sordid alphabet. It looks like I am going to be busy!

Delivery Room with a View

Get the Latest News!